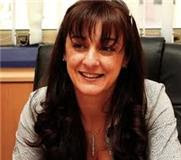 Sharon Ellul Bonici, front woman for Nigel Farage's new pan-European political party, and Maltese Marxist candidate in last year's Euro-elections, has urged the EU to accept a Libyan proposal on immigration, and has voiced her support for the EU's "FRONTEX" border management project based in Warsaw.

She said in a statement that the EU should be able to spare a billion euros towards effectively solving the problem.

Ms. Ellul Bonici welcomed Libya's proposal for a $1 billion in EU aid in exchange for collaboration to stem illegal immigration.

"Some people are saying this is blackmail on Libya's part, but I don't see it that way. Combating illegal immigration is costly. The EU should take this opportunity and make sure it paves the way towards a readmission agreement with Libya," Ms. Ellul Bonici added.

"Then it should strengthen Frontex in order to patrol the EU border and deal with the whole process itself - from asylum applications to readmission and reallocation...íf it takes another billion towards solving this problem it would be a billion well spent" she concluded.

Now we might argue that such political naiveté is a charming little cameo of an island on which compulsory schooling is a relatively new concept. However it is not something that we in the UK might welcome, and in particular the centre-right membership of UKIP might wonder why a UKIP MEP is employing a person who subscribes to such left-wing views. It is the case that UKIP's resident clown, Godfrey Bloom, who left the financial services industry in disgrace after attracting a whopping great fine for his company, is indeed employing Ms. Ellul Bonici as the nominal secretary of Nigel Farage's latest money-spinning pan-European initiative. Of course, this is not a decision that Bloom would have reached on his own - he is Farage's ho, and he does as he is told.

So The New BONICI Construct 'Alliance For Freedom' is pro EU Membership as Reformists!

So The New BONICI Construct 'Alliance For Freedom' is pro EU Membership as Reformists!


may I take the lioberty of pointing out just how glibly Sharon Ellul - BONICI uses the term EUroRealist!

Mrs. ELLUL is clearly, from her own comments, pro EU membership and NOT a withdrawalist - it is interesting to note that Godfrey Bloom as a UKIP MEP was elected on the claims that he was a withdrawalist and wished to represent the views of those who wished to leave.


Now I note Godfrey Bloom is no longer interested in leaving The EU but supports Mrs. Sharon Ellul - BONICI who has said:


On the EU referendum
Five years ago, the people were faced with an option: either to join the EU, or not to join. For my part I argued that we should not join, because membership would be detrimental to Malta. As for the referendum, I always wanted to respect that vote...
MaltaToday, February 2009
On withdrawing from the EU
I personally disagree: in fact I think it would be political suicide. The damage to our international reputation would be irreversible. We would project the image of an unreliable nation that can’t make up its own mind. This in turn would diminish our standing in international fora... which would negatively affect foreign investment... and ultimately, the citizens would suffer.”
MaltaToday, February 2009

Can or should I say Will Ms. BONICI be able to answer a few Questions posed by BARBOO

Can or should I say Will Ms. BONICI be able to answer a few Questions posed by BARBOO
Hi,
perhaps Ms. Bonici would care to assist Barboo with some answers to the questions below - if Ms. Bonici would care to mail me at Greg_L-W@BTconnect.com or phone me on 01291 - 62 65 62 to provide some clarification I will be only too happy to publish her response, to broadcast her reply to a wider audience.
Here are a few questions from Barboo:


Those who promote joining a pan-European party as a means of acquiring large amounts of EU funding are careful to avoid mentioning the cost attached to membership of such a party before this funding can be accessed. What will the membership fee amount to, and how will it be calculated? As a percentage of UKIP members' existing party subscriptions? As an extra sum levied on members? Or by some other formula?
Certainly there will have to be some contribution from UKIP if it decides to join the European Alliance. EU regulations stipulate that a maximum 85% of an EU-party's budget can be provided by EU funding, but the remaining 15% must be contributed by the party itself from other sources. Those sources are not allowed to include donations from EP political groups or donations above 12,000 euros from any individual supporter, so, depending on how much EU funding the European Alliance qualifies for, a further sum will have to be provided by the national parties which make up the Alliance.
How much of this sum will have to be contributed by UKIP depends on whether it is divided equally between the constituent parties. That seems unlikely, as it would be disproportionate for an organisation such as Germany's tiny Stroppy Citizens' Party (BiW) to have to pay as much as a party with thousands of members and several MEPs. As the Alliance member with the largest number of MEPs UKIP could reasonably expect to have to contribute the lion's share of a minimum 15% of the Alliance's total budget.
'Minimum' because EU regulations allow the constituent parties to provide up to 40% of their EU party budget, thus enabling parties that qualify for only a relatively small amount of funding to supply from their own resources the rest of what they need to operate on an EU-wide scale. The European Alliance would get an equal share with other EU parties of 15% of the total EU funding pot, and a share of the remaining 85% in proportion to the number of MEPs it has, so as one of the smaller parties it is likely that it would have to contribute nearer 40% of its budget itself. How much of that would be required from UKIP?