Godfrey Bloom spits in the face of the UKIP membership 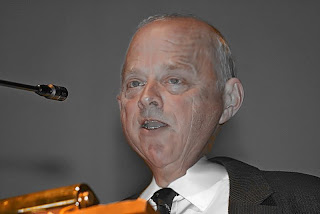 The UKIP membership may have rejected the concept of Pan-European political parties, but that has not stopped good old Godders. The European Alliance for Freedom seems to have a new address in the Godmeister's constituency, in Selby indeed! http://www.eurallfree.org/?q=node/65

But even more interesting is this missive from the Neo-Nazi Vlaams Belaang, in which they discuss their own membership of the EAF, even naming Godders as President of this Pan-European party.
Nice.....!

Taken from The Flemish Republic, newsletter of the Vlaams Belang:


The EAF advocates the right of individuals and peoples to freedom and selfdetermination. Its main objective is to safeguard and strengthen fundamental democratic principles and accountable representation towards effective individual and national freedom.


It therefore commits itself to the following objectives:


• to campaign for a non-centralised, transparent, flexible and democratically controlled EU towards the rejection of any development leading to a European superstate, given that there is no such thing as a ‘single European people’;


• to pursue true subsidiarity and selfrule ensuring that democracy is preserved on the basis of sovereign parliaments in Member States, over which the citizens exercise democratic control;


• to sustain diversity and accountable cooperation at a European level among free peoples able to regulate themselves in accordance with mutually agreed common standards;


• to uphold freedom of political expression and association across Europe and especially within the structures of the EU;


• to promote a political environment in which movements, political parties and other political organisations are given equal opportunities to voice their concerns and advance their political positions;

• to ensure that the peoples and nations of Europe are allowed to pursue their right to strengthen their own historical, traditional, religious and cultural values to defend civil liberties and ensure that no characteristics of a totalitarian nature emerge in the continuing political development of the European Union, while identifying already existing anti-democratic legislation with an aim to revoke it.